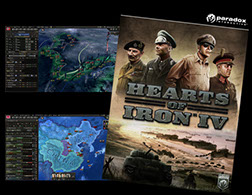 After seven long years, Hearts of Iron IV was finally released to a wildly expectant audience. Having gradually built its reputation as one of the greatest hardcore strategy franchises in gaming, Hearts of Iron IV was the most accessible game in the series to date while losing none if its depth. Using our extensive media relationships, Johnny Atom managed to secure coverage in outlets that traditionally would not cover such a hardcore strategy game.

Examples included Vice Magazine and The Sun who scored it 4/5 and reflected on its depth and scale by commenting that “you’ll still be playing it at 1am without realising it”.