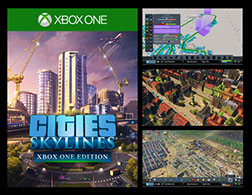 Hailed as the new benchmark in the City Building genre upon its original PC release in 2015, Cities: Skylines made its much requested debut on console with the Xbox One and PlayStation 4 editions releasing in 2017.

Targeting the Specialist Gaming and Mainstream media, some of whom did not cover the PC release due to being console led, the game lived up to their expectations with Official Xbox Magazine scoring it 8/10 and Metro Game Central saying “the overall experience is pleasingly unique on consoles.”