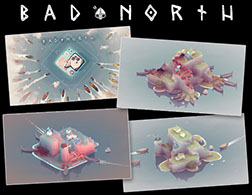 Developed by Plausible Concept and published by Indie darlings Raw Fury, the brief from the client was for a short (and simultaneous) announcement + review and Influencer campaign for the Switch, PS4 and Xbox One releases in the UK, France and Germany. Along with our European partners, we therefore had to work fast and hard to place Bad North with as many key gaming outlets and Influencers as possible to ensure as much positive awareness around the games’ launch. This was achieved as positive news, review and “Let’s Play” coverage was secured with outlets including Eurogamer, Nintendo Life and Reformist TM in the UK, Jeux Video and Gameblog.fr in France, along with GameStar, 4Players and PCGames.de in Germany.